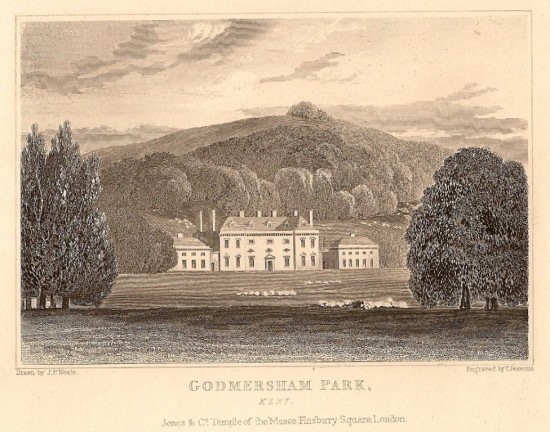 The Reading with Austen website focuses on the contents of the Godmersham Park library as noted in the 1818 catalogue of the collection. We know that Jane Austen read and rested in this library because her letters tell us so, and the RwA website has brought this long-ago library back to colorful life. So it is a very interesting treasure to stumble upon other mentions of this library. The scholar Hazel Jones [HJ]* has been very generous in sharing her research into the diaries of Austen’s nephew Charles Bridges Austen (later Knight), who also spent time in this very library. Ms. Jones is writing a book on Edward Austen Knight’s sons, and in reading (and transcribing) Charles Bridge’s diaries (which are housed at Jane Austen’s House Museum ), she finds numerous references to the titles he is reading. 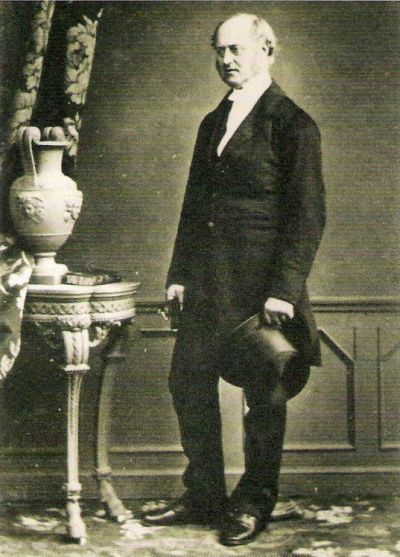 Charles Bridges was born March 11, 1803 at Godmersham Park in Kent, the 8th child of Jane Austen’s brother Edward Knight and Elizabeth Bridges. He was a commoner at Winchester* from 1816-1820, attended Trinity College, Cambridge and was ordained in 1828. He was the curate of West Worldham in Hampshire and rector of Chawton from 1837-1867. He died unmarried on October 13, 1867, aged 64 years. He is buried in the graveyard at the St. Nicholas Churchyard in Chawton (Section B: Row 2. 70 ).

Listed here are the books in the library that Charles mentions, beginning with his diary entry for February 17, 1832. Not all these books were in the 1818 catalogue, often being published after that date, and therefore not part of the RwA project. But I list them just the same, as it shows the continuing depth and use of the library in succeeding years, as well as Charles’s reading habits and often humorous commentary. We must also consider that Charles had his own copies of books and why they do not appear in either the 1818 or 1908 catalogues.

Friday Feby. 17. … In the morning I examined the Greenfinch. It differed from Willoughby’s (Charles’ spelling) description in having no white on the belly but all greenish yellow, inclining to white just by the vent. Its four outmost tail feathers on each side were black about a third from the top yellow below, the underside the same only the colours more dusky. Examined the wind[jammer?] or Kestrel, but not much for the feathers round the mouth were covered over with little insects, not distinguishable but thro’ a microscope. Less than Willughby’s — ‘ (CHWJA:JAH409.1) (Diary marked number 2, January 22, 1832 – August 10, 1832)

[HJ notes: Charles was a keen amateur naturalist and often shot small birds and mammals, as well as game, in order to dissect them and record his findings.]

The book is a Lost Sheep: 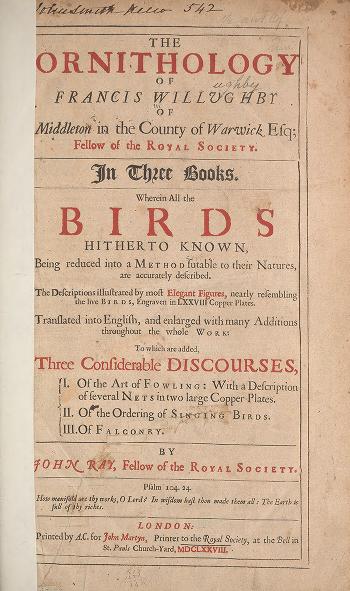 Willughby, Francis. The Ornithology of Francis Willughby of Middleton in the County of Warwick Esq; Fellow of the Royal Society. In Three Books. Wherein All the Birds Hitherto Known, Being reduced into a Method sutable [sic] to their Natures, are accurately described. The Descriptions illustrated by most Elegant Figures, nearly resembling the live Birds, Engraven in LCCVIII Copper Plates. Translated into English, and enlarged with many Additions throughout the whole Work: To which are added, Three Considerable Discourses, I. Of the Art of Fowling: With a Description of several Nets in two large Copper Plates. II. Of the Ordering of Singing Birds. III. Of Falconry. By John Ray, Fellow of the Royal Society. [Epigraph on title page]. London: Printed by A.C. for John Martyn, Printer to the Royal Society, at the Bell in St. Pauls Church-Yard, 1678. 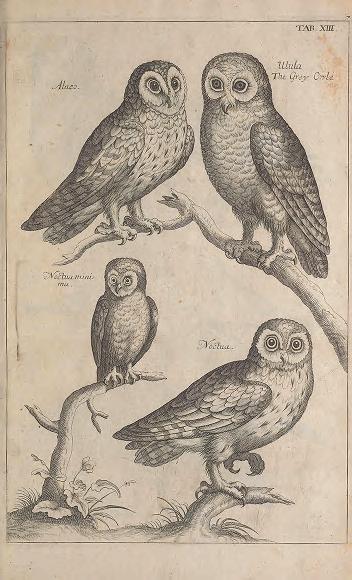 Sunday March 11. My birthday 29 years old. I ought to make better use of my time, & hope to spend this year more profitably than the preceding … I should like to get up at six dress & read the Bible till 1/2 past 7, then sermonize for two hours every other day, on the alternate days read Butler’s Analogy Sermon on the creed or some other doctrinal work. From ten till 1/2 past 11 Horace’s satires or some other classic, alternate days some scripture history; till past one natural history. Before bed time read a sermon or some practical work of divinity. Any intermediate time reviews or some other modern light reading. Then the history of England & modern Geography in which I am sadly deficient ought to come in … I read part of Barrow’s sermon on the Gunpowder Treason. (Ibid.)

[HJ notes: He is distracted from this very worthy list by a flock of birds in the high trees at the end of the lawn. What a pity he does not specify which room he is occupying.]

The book is in the Knight Collection with the Thomas Knight bookplate. 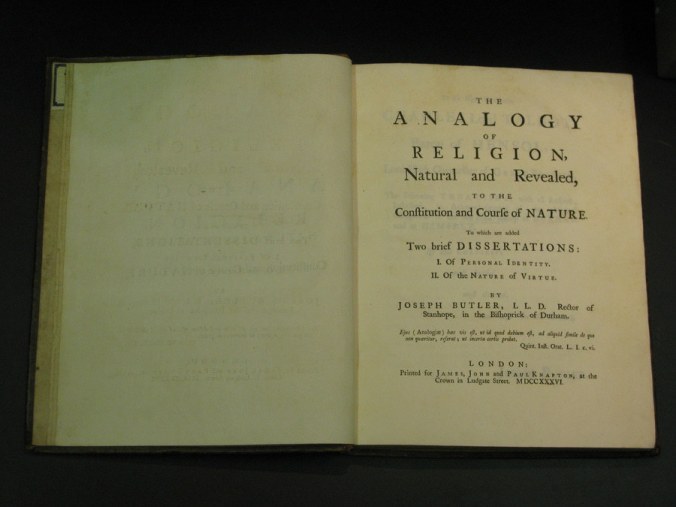 Butler, Joseph. The Analogy of Religion, Natural and Revealed, to the Constitution and Course of Nature. To which are added Two brief Dissertations: I. Of Personal Identity. II. Of the Nature of Virtue. By Joseph Butler, LL. D. Rector of Stanhope, in the Bishoprick of Durham. [Epigraph on title page]. London: Printed for James, John and Paul Knapton, at the Crown in Ludgate Street, 1736.

Horace’s satires are is also in the 1818 library collection and so Charles may have continued with his consciously-plotted daily plan of study. The “Satires” are part of a 4-volume edition of the works of Horace:

A Poetical Translation of the Works of Horace: with the Original Text, and Critical Notes collected from his best Latin and French Commentators. By the Revd Mr. Philip Francis, Rector of Skeyton in Norfolk. In Four Volumes. The Fourth Edition, Revised and Corrected. London: Printed for A. Millar, at Buchanan’s Head, opposite to Katharine-Street, in the Strand, 1750.

These volumes all contain Thomas Knight’s signature but have the MGK armorial bookplate – they are extant in the Knight Collection.

April 11. … I have lately been reading Chesterfield’s letters. I think they contain very good rules for good manners, such as must be good for every one who would follow them, that is the spirit of them generally, but there is a great want of warmth, in fact no feeling in them: they are written by a cold hearted man of the world, who would make his son very polished graceful & genteel, very learned, and rather moral, whether religious or no he does not seem to care. He would recommend him to court [someone’s?] acquaintance because he is rich and likely to be of consequence.'(Ibid.)

The book is in the Knight Collection; it has the less-common MGK oblong bookplate: 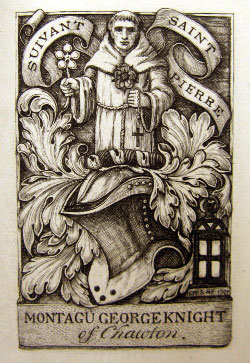 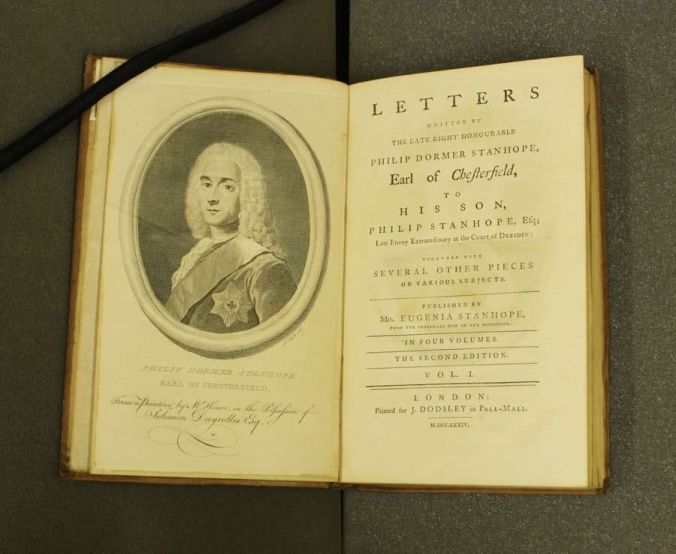 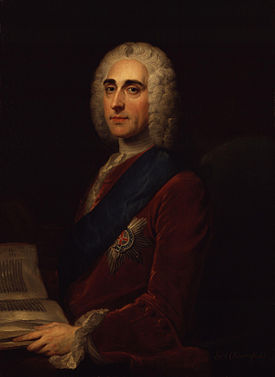 Stay tuned for Part II as we continue with Charles’s reading … Thank you Hazel for sharing these with us!

*Hazel Jones is the author of Jane Austen & Marriage (Bloomsbury Continuum 2009, Uppercross Press 2017), Celebrating Pride & Prejudice (co-authored with Maggie Lane, Lansdown 2012), Jane Austen’s Journeys (Hale 2014) and is currently writing a book on Jane Austen’s Knight nephews. She was a tutor in the Department of Lifelong Learning at Exeter University until 2005 and continues to teach residential courses on aspects of Jane Austen’s writing, life and times. She is the membership secretary and a co-founder of the UK Jane Austen Society, South West Branch.

**Winchester College, a boarding school for boys founded in 1382, had 70 scholars and 16 “Quiristers” (choristers). The statutes provided for ten “noble Commoners,” paying guests of the Headmaster, and later had up to 130 such boarders [Wikipedia].